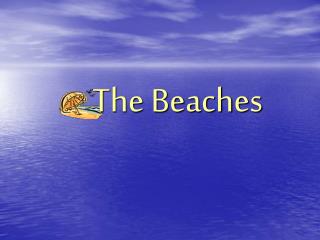 The Beaches. Where are the Beaches?. The Beaches are by Lake Winnipeg. Patricia Beach. Beaconia. They are at the northern tip of the St. Clements municipality. Grand Marais. Grand Beach. Balsam Bay. Sunset Beach. Lakeshore Heights. The First Settlers.

Book Kerala Tour & Holiday Package - Kerala is a destination which each nature-loving traveler would like to visit.

Beaches in Maharashtra - Explore the list of all beaches in maharashtra. spend your weekend with popular beaches in

Lord of the Flies by William Golding - . an introduction. william golding and lotf …what did you find out?. william

SURFING - . when did i start surfing?. best beaches near by . woolacombe. saunton . croyde. my experience . parts of the

Some of the most Beautiful Beaches in the World - . bora bora pearl beach one polynesia. phi phi island thailand. la

Ecology of a Rocky Shore Community - . understanding the influence of tides. tides have a powerful influence on how and