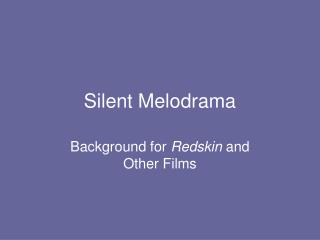 Silent Melodrama. Background for Redskin and Other Films. Melodrama . Works primarily on a nonverbal and emotional level, a “common base of feeling that crosses over all linguistic barriers” (Belton 127). Primarily concerned with establishing mood or emotion. Two Senses of the Word. Silent Launch - . on a notecard (on the lined side) answer the following: 1. what is a goal? 2. why are goals important?

Silent Film - . silent film was never truly silent. you always had a piano player or an orchestra, plus a lecturer. where

Silent work. - Silent work. to whom much is given, much is expected. mug. i learned this when i visited my uncles farm

Silent Work - . i know that i know nothing. socrates. vocabulary quiz # 20. thoroughness after death in large numbers a

Silent Work - . the king does not repeat himself. mr. norman ( t he king). mug. wandering around in a daze and blabbering

SILENT PPOs - . texas department of insurance. what is a “ppo?”. ppo is an acronym commonly used to refer to a

Silent Work - . all wish to possess knowledge, but few, comparatively speaking, are willing to pay the price. juvenal.

Silent Films - . by charlotte reinnoldt. what are silent films?. movies with no recorded sound popular from 1894 to 1921

Silent Work - . as irrigators make water go where they want, as archers make their arrows straight, as carpenters carve