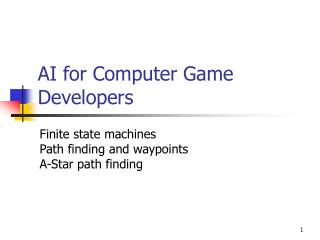 AI for Computer Game Developers. Finite state machines Path finding and waypoints A-Star path finding. Finite State Machine. An abstract machine that can exist in one of several different and predefined states . Define a set of conditions that determine when the state should change. Game Developers - Game borough is a platform for gamers and indie game developers. as digital natives, they were born and