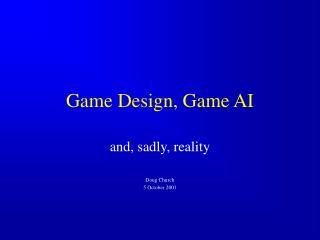 Game Design, Game AI. and, sadly, reality Doug Church 5 October 2001. Outline of Talk. What are Games, What are AI’s Where they have met, and failed to meet Where are opportunities What’s My Agenda … with lots of examples … and time for Q&A. Background.

Video Game Satisfaction with Adaptive Game AI - . by aaron elkin. what makes video games enjoyable?. this is a popular

Game Design - . why study game design in cs?. it's fun and interesting. might be in a one-person company or project be

Game Design - . thoughts and new concepts. chapter one : why write this book?. kids also move on from certain game as