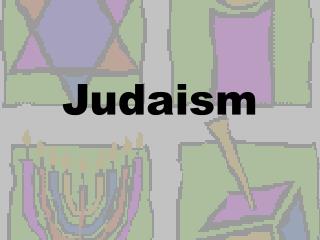 Judaism Judaism Facts Judaism is around 3500 years old and is the oldest of the world's four great monotheistic religions (religions with only one god). It's also the smallest, with only about 12 million followers around the world. Where did Judaism originate from?

Judaism - Was the religious foundation for christianity and islam. ... studies both could set apart cultural ideas from

Judaism - . by dane warren and johnathan clark. core beliefs in judaism. there is only one g-d. g-d isn’t composed of a

Judaism - . the term “jew” or “jewish” can refer to…. any person of jewish parentage anyone born of people who

Judaism - . judaism is one of the oldest monotheistic religions in the world – over 3500 years old. monotheistic means

Judaism - . overview. judaism began in a region known as the ancient near east over 3,500 ago. the story of the old

Judaism - . a covenant people. basic facts. not a doctrine, an idea, a faith, but a covenant between god and the people

Judaism - . “ i will make you exceedingly fruitful; and i will make nations of you, and kings shall come forth from

Judaism - . an introduction to key ideas. god. belief in a personal “other” anthropomorphisms are symbolic, but . . .