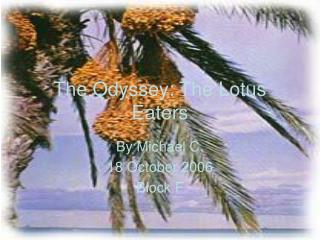 The Odyssey: The Lotus Eaters. By Michael C. 18 October 2006 Block F. Plot Summary. Odysseus and his men made their way to Ismaros where they met the Ciconians. They destroyed the city, killed the men, and kept the women, some cattle, and goods.

THE ODYSSEY - The trojan war is over and odysseus heads home for ithaca.. but he is blown off course! he went first to

THE ODYSSEY III-V - . the magical mystery tour continues. what are we going to discuss today?. the who and the where of

Tennyson’s The Lotos Eaters - . this poem is based on the story of odysseus's mariners of homer's odyssey . in this

The Lotus-Eaters - . by: jordan zarzour 7 th period. background information…. zeus gets angry with odysseus and his

Background for The Odyssey - . what i need to understand before i start reading . author of the odyssey. homer blind bard

The Odyssey - . homer. questions to answer. what is an odyssey? what is an epic poem? who is homer? who is odysseus? what

Questions - . where is ody sent at the end of chapter 10? who are the laestrygonians ? what do they do to ody’s crew?