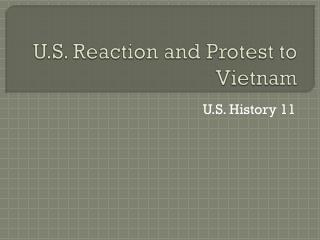 U.S. Reaction and Protest to Vietnam U.S. Reaction and Protest to Vietnam

PROTEST AND REBELLION - . the vietnam war. where is vietnam?. why are we here? sides of vietnam. country divided at the

PROTEST - . why are people protesting globalisation (because the plants and animals can’t?) why protest free trade? why

U. S. RESPONSE TO TERRORISM - . part iii april, 2013. “what other military programs has us used…?”. covert methods

Vietnam War Protest Music - . protest music. during the war, many artists protested vietnam by singing for peace and

Vietnam and the Era of Protest - . in 1941, the vietminh united both communists and non-communists in the struggle to

From Protest to Revolution - . chapter 5, section 3. how did a dispute over tea lead to tension between the colonists