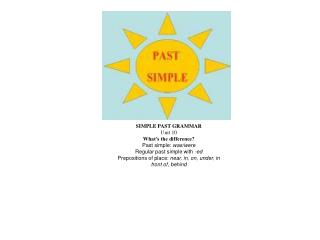 SIMPLE PAST GRAMMAR Unit 10 What’s the difference? Past simple: was/were Regular past simple with -ed Prepositions of place: near, in, on, under, in front of, behind. Simple Past Tense http://www.learnenglish.de/grammar/tensesimpast.htm. Complete the sentences with was or were . SIMPLE PAST - . simple past. to talk about activities that began and ended in the past. (yesterday, last night, two days

Past Simple - . present simple or past simple we (to like) to cook but we (not to like) to wash the dishes. who (to ring)

The Simple Past - . what? when? how?. ©mjh_teacher. read the following texts. pay special attention to the form of the

SIMPLE PAST - . s imple past . the simple past expresses an action in the past taking place once, never, several times.

Simple Past - . grammar essential # 44. “simple past”. without learning a new tense, one can talk about what just

Simple Past - . m.sc . ronnison reges vidal. roteiro. simple past, form simple past, be, have, do affirmative negative

Past Simple - . past simple - use. 1) action finished in the past i visit ed berlin last week. 2) series of completed

Past Simple - . the day before yesterday yesterday last week …ago once last year last month. ten days ago . a month

Past Simple - . past continuous . past simple. we use past simple when we talk about: completed action in the

PAST SIMPLE - . i walked to college yesterday. she didn’t phone me last week. when did you arrive in this

PAST SIMPLE - . the simple past expresses an action in the past taking place once, never, several times. it can also be

THE PAST SIMPLE - . formation and use. we use the past simple to talk about finished or repeated ( habitual ) actions in

PAST SIMPLE - . we use the past simple to talk about: finished actions in the past : she climbed the stairs and went to