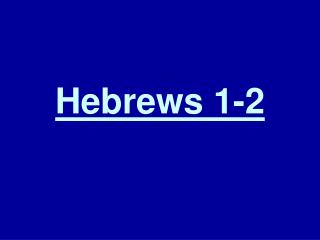 Hebrews 1-2. Theme : Perfection is obtained by complying with the requirements of the everlasting gospel as revealed by Jesus Christ! We do not know where it was written (Hebrews). One of the so far unsolved mysteries of sectarian scholarship is: Hebrews 1-2 - . theme : perfection is obtained by complying with the requirements of the everlasting gospel as revealed

Hebrews 1:1-2 - God , after he  spoke long ago to the fathers in the prophets in many portions and in many ways, .

Hebrews 1:1-2 - 1 god, who at sundry times and in divers manners spake in time past unto the fathers by the prophets, 2

Hebrews 2:1-4 - What the bible says about…. signs,. wonders,. miracles. &amp; gifts. helpful chapters you might

Hebrews 12:1-2 - . 1 therefore we also, since we are surrounded by so great a cloud of witnesses, let us lay aside every

Hebrews 2 - . responding to revelation 2:1 we must pay more careful attention, therefore, to what we have heard, so that

Hebrews 13:2 - Be not forgetful to entertain strangers: for thereby some have entertained angels unawares. psalm

Hebrews 2:10,11 - . formed for fellowship. god is building a family for himself that will last for eternity. “love

Hebrews 12:2 - . good friday: the cross and shame. “ and the man and his wife were both naked and were not ashamed.

Hebrews 1:1-4 - 1 in the past god spoke to our forefathers through the prophets at many times and in various ways, 2 but

Hebrews – Lesson 1 - . introduction. format of the study. 13-week study, based on the text of hebrews lesson sheet for

Hebrews 12:1 - . let us lay aside every weight. hebrews 12:1. therefore, since we are surrounded by so great a cloud