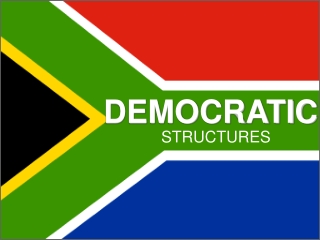 DEMOCRATIC. STRUCTURES. DEMOCRACY. … is a form of government in which all the citizens of a nation together determine public policy, the laws and the actions of their state, requiring that all citizens (meeting certain qualifications) have an equal opportunity to express Democratic Ideals - . by trish henry. life. you have the right to live without the fear of injury or being killed by

DEMOCRATIC SCHOOLS - . why we need them and what they look like derry hannam idec 2012, caguas, puerto rico march 2012.

Democratic Rights - . section 3 states that every citizen has the right to vote restrictions are: age, mental capacity,

Democratic Political Systems - . separation of powers. mentioned briefly in lecture one central concept in most