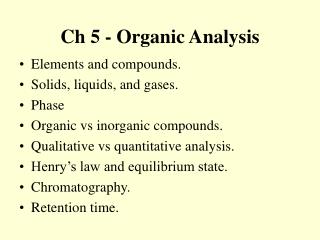 Chapter 5 ORGANIC ANALYSIS - . introduction. an element is the simplest substance known and provides the building block

Organic Analysis - Honors forensic science. organic analysis. i. elements and compounds. a. matter = anything that has

Organic Analysis - . basic concepts. elements and atoms. fundamental building block of all substances is the element.

Organic Analysis - . chapter 5. ok – some really basic chemistry. matter – anything that has mass and occupies space.

Ch. 5 - Subject verb agreement . ch. 5. agreement of subject and verb. a verb should agree in number with its subject.