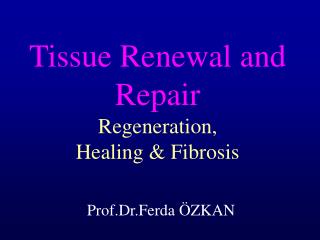 Tissue Renewal and Repair Regeneration , Healing & Fibrosis. Prof.Dr.Ferda ÖZKAN. The body's ability to replace injured or dead cells and to repair tissues after inflammation is critical to survival. DNA Replication/ Regeneration - . goal of dna replication. makes an _________ copy of itself (needed for new cells

Chapter 8 Skin Integrity and Wound Care - . functions of the skin. the body’s first line of defense protecting it from

HOLY ORGASM THE SCIENCE OF SEX , THE ART OF HOLISTIC HEALING AND THE SECRETS OF REGENERATION - . sex is not a sin…

Tissue Repair - . ways of repairing tissue. tissue repair depends on the type of tissue damaged and the severity of the

What is Rhinoplasty and face contouring surgery? - Plastic surgery not only helping people to make their face beautiful,