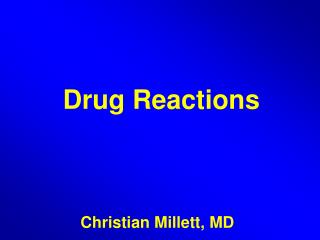 DRUG REACTIONS - A drug may be defined as a chemical substance, or combination of substances, administered for the

ADVERSE DRUG REACTIONS - . dr. shabana ali. adverse drug reactions (adr). harm associated with the use of a given

Adverse Drug Reactions - It is all about adverse drug

Allergic Drug Reactions - . epidemiology*. it is believed that approximately 2-6% of all hospitalizations are due to

Adverse Drug Reactions ADRs - . drug safety has always been a concern …. and should remain so. ‘first do no harm …

Drug-Induced Skin Reactions - . objectives. the learner will be able to: identify cancer treatments most likely to cause

Chemical Reactions in the Drug World - . synthesis and biological actions of cocaine. this powerpoint is hosted on

Chemical Reactions in the Drug World - . synthesis and biological actions of cocaine. overview. cocaine synthesis and