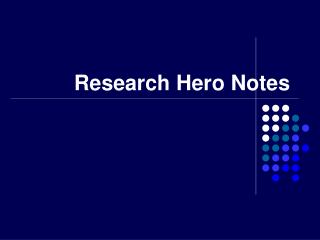 Research Hero Notes. Question 1- How did the hero's childhood affect the choices that they made?. Evans Wadongo: Grew up in a home where education was important (“Saving lives’”) Both his mother and father were school teachers (About Evans Wadongo) Elie Wiesel Hero Notes - . “…to remain silent and indifferent is the greatest sin of all…” –elie wiesel

Neil Armstrong Hero Notes - . by kevin gamache. q. #1 what was his early life like?. neil alden armstrong was born in

Epic Hero Notes The Odyssey - . themes for the odyssey. loyalty, devotion and courage in the face of great adversity or

Research Notes - . hannah lindsay. hero. someone who shows great courage (“hero”). someone who fights for a cause

Research Notes - . plagiarism - to steal and pass off (the ideas or words of another) as one's own. credible -

Planet Research Notes - . you will be researching a planet and presenting your information to the class follow the format

Research Paper Notes - . mrs. luehrs. topic choice. brainstorm a list of possible topics choose the one that you

Research Paper Notes - . what is a research note card?. notecards are 3x5 index cards with only one, just one, no more

Research Paper Notes - . jimmy pierce. question 5: how has sports journalism developed throughout the years of its