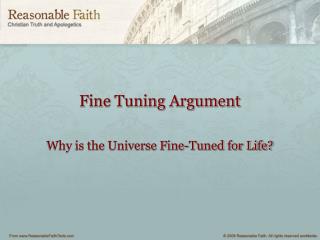 Fine Tuning Argument. Why is the Universe Fine-Tuned for Life?. Ancient Perspectives - Plato. Plato (429-347 BC) inferred God “from the order of the motion of the stars, and of all things under the dominion of the Mind which ordered the universe” (Laws 12.966e). Aristotle (384-322 BC). The Fine- Tuning Argument - . an argument from physics &amp; cosmology. what is being argued for?. arguing as an

UNIVERSE’S FINE TUNING = DESIGN - So far, we have examined only the universe’s three (the mass-space density ratio

Fine-Tuning Your Paragraph - . going through the process. writing unified paragraphs . a paragraph is unified when all

Fine-Tuning the User Experience : - . integration of blackboard and libguides. iolug conference, may 16 th , 2014. how it

Fine-Tuning the RFQ End Region - . “…the devil is in the detail”. rfq bulk design very close to completion but