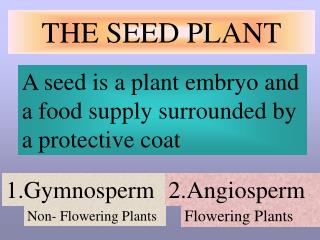 Seed/Plant Vocab Quiz - . 1. the beginning of growth or sprouting of a seed. 2. plant whose seed contains two seed

From Seed to Plant - . delete this slide and then save template for student use in your grade level folder in student

From Seed to Plant - . focus skill: sequence. seeds begin in flowers. pollen lands on the stigma and goes through the

From Seed to Plant - Vocabulary and skill practice. from seed to plant. v ery pretty my family sent beautiful flowers for

Plants and the Plant Seed Cycle

What Seed Will You Plant? - . what seed will you

Parts of a Seed Plant - . objectives: explain the lifecycle of a gymnosperm and an angiosperm. gymnosperms. a gymnosperm

Parts of a Seed Plant - . objectives: explain the lifecycle of a gymnosperm and an angiosperm notes = white. gymnosperms.