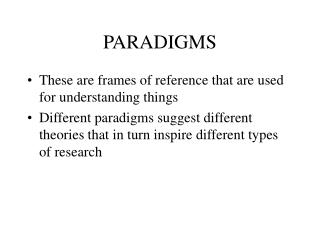 PARADIGMS. These are frames of reference that are used for understanding things Different paradigms suggest different theories that in turn inspire different types of research. Different Paradigms

July 16, 1998 Gordon Bell Microsoft Corporation - Six future challenges: 50 years after the celebration of the birth of

THE NETHERLANDS AFTER 1945: TWO SILENT REVOLUTIONS AND ONE VIOLENT ONE? - Eighth meeting of the phd course paradigms and

Programming Paradigms and languages - . criteria covered in this presentation. p1 : describe the application and limits

By PresenterMedia.com - . introduction to childhood mental illness. review. paradigms in psychopathology. a paradigm is a

Graph Models for Sensor‘s Networks A personal and partial view - . j. diaz. partially supported by the eu within the