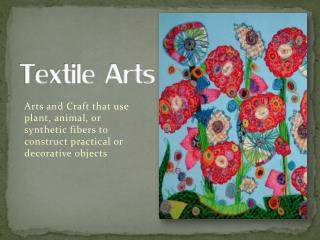 Textile Arts. Arts and Craft that use plant, animal, or synthetic fibers to construct practical or decorative objects. The word textile is from Latin texere which means "to weave", "to braid" or "to construct”. TEXTILE ARTS - . objects constructed using fibres that are aesthetic or functional . textile art is the creation of

House of Textile Arts - . the house of textile arts is a joint venture of three associations dedicated to preserve

TEXTILE - . textile is a latin word which refers to woven fabrics. the term now has a broader meaning and covers

Introduction of Textile and Textile Fibers - . the history of fibers is as old

Textile Museum - . busto arsizio. an industrial town …. …is rediscovering its history . and is planning its

Textile Artists - . cas holmes. www.casholmes.textilearts.net.  look at her sketchbook for ideas to include in your

TEXTILE DESIGNING - Textile designing is a creative field which include fashion designing, carpet designing and designing