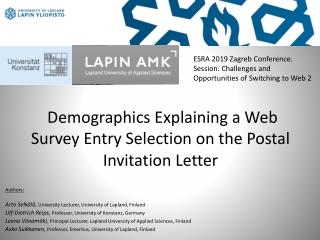 A Survey on Classification of Feature Selection Strategies - Feature selection is an important part of machine learning.

Entry Level Cover Letter Sample - You must add the entry level cover letter with your resume. it will help you to catch a

Material Selection Survey - . we will be clarify in this survey study of packaging materials commonly used in the our

Survey Methodology Survey data entry/cleaning - . epid 626 lecture 10. to do or not to do: contracting the work. during