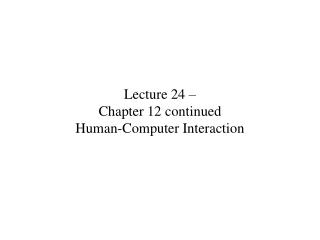 Chapter 25 - . metabolism and nutrition suggested lecture outline. introduction. the food we eat is our only

Cardiovascular System: The Heart Chapter 19 – Lecture Notes - . to accompany anatomy and physiology: from science to

Chapter 16: Troubleshooting - . learning objectives. develop your own problem-solving strategy use the event viewer to

CHAPTER Modulation - . chapter objectives. explain amplitude, frequency and phase shift modulation give an example of a