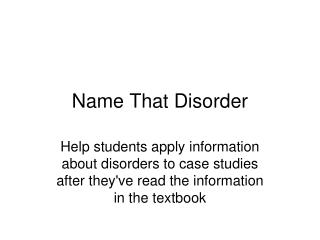 Name That Disorder - . this activity presents case studies in which individuals suffer from symptoms of psychological

Pick that Personality Disorder!!! - . feelings of inadequacy doesn’t like to socialize with others very sensitive to

Name That Tune - How to play. start naming that tune!. name that tune. objective. made by: layne liberty. click to go

Name That Price - . money talks. remember. there is only one of each game on this powerpoint. each game can only be

Name That Technology… - . film projector. it “is going to make school so attractive that a big army with swords and

Name! That! Language!!! - . how solid is your knowledge of europe’s main languages?. which world language?. listen to

NAME THAT ‘TOON - . write down the name of the cartoon as soon as you recognize it and raise your hand. do not talk

Name That Region - . for each slide, identify the type of region. functional, formal, or vernacular. wrigleyville.

Name that Civilization! - . this civilization developed in and around what is veracruz, mexico? a: olmec this