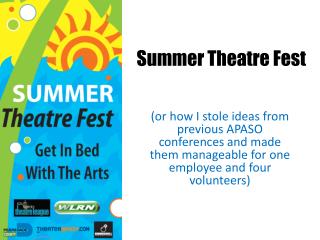 Summer Theatre Fest. (or how I stole ideas from previous APASO conferences and made them manageable for one employee and four volunteers). Background on SFTL. South Florida Theatre League is 20 years old. Lack in Brand Identity – three names over the past six years Summer Musical Theatre Workshops - Weu2019re one of the leading providers of arts education to schools, businesses,

Outlaw Music Fest Returns for 2019 Summer Run - The outlaw music festival is hitting the road once again in 2019,

Design Fest - . tartuffe, or the imposter. the spotlight challenge. “all designs should have a single concept based on

October Fest - Her name was european union julia. her first son german günter was born in 1951. after some years, in