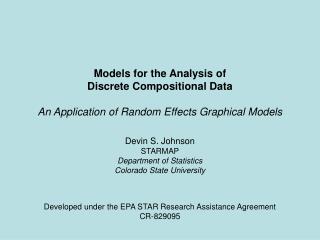 So You Want to be a Statistician? - . alex trindade associate professor of statistics department of mathematics &amp;

Launched in 2007, the Collaboratory works with public and private partners to: - Colorado’s clean energy research

Megan Mocko Department of Statistics, University of Florida Brad Hartlaub - A two semester study: the effects of an