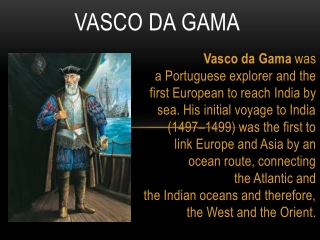 Vasco da gama. Vasco da Gama was a Portuguese explorer and the first European to reach India by sea. His initial voyage to India (1497–1499) was the first to link Europe and Asia by an ocean route, connecting the Atlantic and the Indian oceans and therefore, the West and the  Orient. Vasco Da Gama - . by: grace and sam. introduction. born in 1469, in sines, portugal father was estevao da gama, a