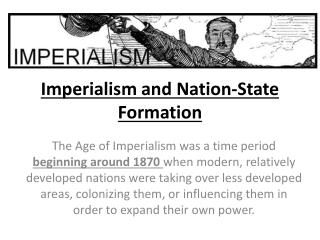 Imperialism and Nation-State Formation. The Age of Imperialism was a time period beginning around 1870 when modern, relatively developed nations were taking over less developed areas, colonizing them, or influencing them in order to expand their own power. Imperialism.

imperialism - . an introduction seen through the lens of old fort niagara a crossroads of empires: french, british,

European Imperialism - . european nations compete to control the pre-industrial world. do now. examine the cartoon and

ION FORMATION - . an atom there are the same number of protons and electrons it is electrically neutral. ion formation.

THE AGE OF IMPERILAISM - . the world and the united states. world history gee unit. american and world imperialism

Entering the World Stage - . america becomes an imperialist power. what is imperialism?. reasons for imperialism:.

Starting a New Nation - . trials and errors. the young nation. should the new nation be 13 independent countries or is it

The Age of Imperialism (1850 – 1914) - . imperialism: building empires by expanding territory and gaining

The Book of Deuteronomy “Looking to Thee From Day to Day” - . book of deuteronomy in the old testament. deuteronomy

Chapter 19 World War I and Its Aftermath - . section 1 the united states enters world war i section 3 a bloody conflict.