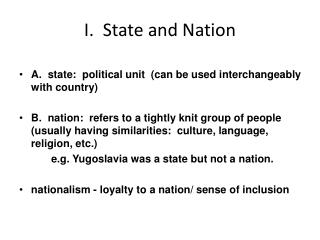 I. State and Nation. A. state: political unit (can be used interchangeably with country ) B. nation: refers to a tightly knit group of people (usually having similarities: culture, language, religion, etc.) e.g . Yugoslavia was a state but not a nation .