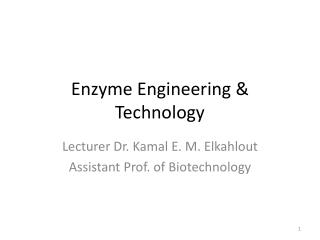 Chapter 13 Enzyme Kinetics - . outline. what characteristic features define enzymes ? can the rate of an enzyme-catalyzed

Chapter 14 Mechanisms of Enzyme Action - . outline. what are the magnitudes of enzyme-induced rate accelerations ? what

Enzyme Review - . what are enzymes?. enzymes are proteins that speed up chemical reactions. they act as catalysts to

Enzyme Questions - . how does an enzyme affect the activation energy of the chemical reaction it catalyses? why can a

Enzyme kinetics - . why study the rate of enzyme catalyzed reactions?. study of reaction rates is an important tool to

Enzyme Catalysis - . enzymes have enormous catalytic activity. the substance whose reaction the enzyme catalyzes is

Enzyme Immunoassay - . enzyme immunoassay. the eia is a type of nonisotopic immunoassay in which enzymes, coenzymes,