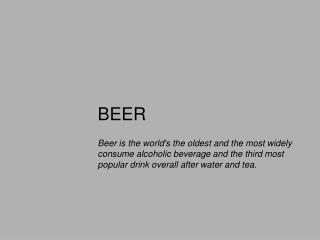 BEER. Beer is the world's the oldest and the most widely consume alcoholic beverage and the third most popular drink overall after water and tea. INTRODUCTION. Beer - . helping ugly people to find the parter of their dreams since the third swig just drink it

BOCK BEER - . history and styles. what is bock?. a strong lager of germanic origin. styles include: traditional , maibock

Beer 101 - . syllabus. an introduction to beer: facts, history, and uses i encourage discussion and participation i

Making Beer - Making beer is an easy task and you can make it at home with some basic ingredients. learn about the

Beer Distributors: - . promoting responsibility in their communities. beer distributors in the community. beer

Beer Filtration - To filter or not. what are you trying to accomplish? . clarity and physical stability microbiological

Beer Sales - . 1. we chose linear trendline because it mostly resembles the line and also because its steady increase. 5