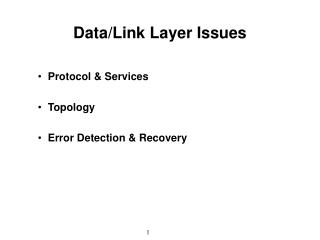 Data/Link Layer Issues. Protocol & Services Topology Error Detection & Recovery. Topology vs Geography. Physical Layout How the signal actually travels. Logical Layout "How devices talk to each other" -or- "How devices hear each other". Topologies. BUS.