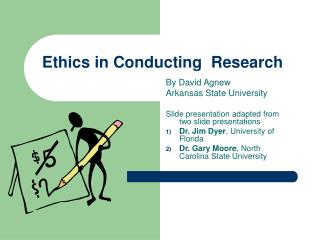 Ethics in Business Research - . what are research ethics?. ethics are norms or standards of behavior that guide moral

Research Ethics - . summary. but what has ethics got to do with research?. is “pure” research above ethics and

Michael Concannon - Research ethics.......... health care ethics what are ethics?. aim of the session:to clarify what

Ethics in Psychological Research - . mr. jochem . reflections on ethics. before we begin… answer the following

Background to Research Ethics - . aim to provide an overview as to why research ethics is high on the agenda. background.

What are the Ethics of Research? - . research and sociology. code of ethics. canadian sociology and anthropology

Ethics in Research - . qualitative research methods. ethics in research. why important? with ethics there is often no

Ethics in Research - . the ethical standards of the american psychological association http://www.apa.org/ethics/ (2002