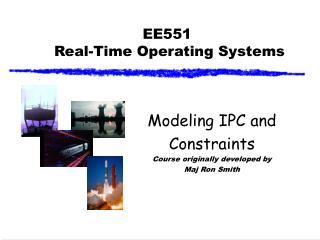 EE551 Real-Time Operating Systems. Modeling IPC and Constraints Course originally developed by Maj Ron Smith. So far…. We have covered RMA Priority based on period Utilisation bound What are the limitations of RMA? We have covered DMPO