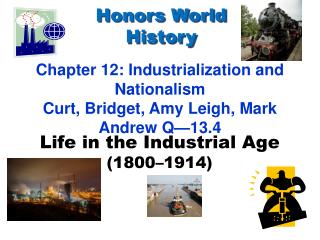 The Emergence of Industrial Society, 1750-1914 - . chapter 23 eq: how did the industrial revolution begin? what was its

INDUSTRIAL REVOLUTION - . first phase of industrialization had largely been forged from iron, powered by steam engines,

The Second Agricultural Revolution And the Industrial Revolution 17 th century-1914 - . by sarah and kisun set 1. surplus

Russian Life in the 1800’s - . the role of women. pre-reading question. “women are emotional and irrational in