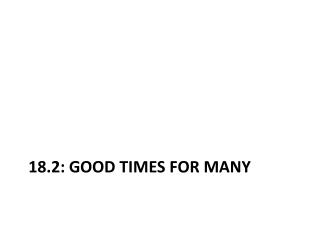 18.2: Good times for many. Terms. Jazz: a kind of music created by African Americans in the South in the early 1900s Renaissance: a time of new interest and activity in the arts. Prosperity:. 1920s: Time of prosperity / change for many people More people had wealth / luxury The 1920s - . the jazz age normalcy and good times the great depression begins. continued on next slide. rise in racism

The Cricket in Times Square - . genre: fantasy- a story with invented characters, setting, or other elements that could

Antichrist and the End Times - . lesson 33 and 34: revelation 6 and the four horsemen of the apocalypse. revelation

Antichrist and the End Times - . aet-029 and 030: the rapture and the feast of trumpets. end times

Regular Expression - . ^ beginning of string $ end of string . any character except newline * match 0 or more times +

Lecture 3 : Introduction to SQL - . september 29, 2014. announcements. there are good videos. watch the sql video. there