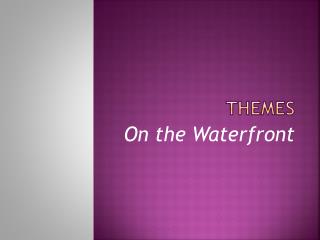 THEMES. On the Waterfront. Terry’s Moral growth. Write down what/who influences Terry to testify at the Waterfront Crime Commission Hearing. How does Terry’s body language and voice change throughout the film and what is this symbolic of? What is Terry standing up against?.