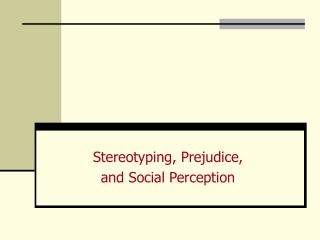 Financial Health of the Government - . much valuable discussion fails to occur because of pride and prejudice. prejudice

Perception &amp; Consciousness - . unit 2. how do we sense our worlds ?. learning objectives distinguish between

Perception - . we are at the beginning of a new section of the course. while the first section focused on the underlying