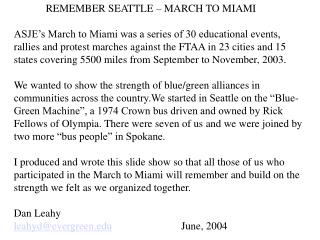 REMEMBER SEATTLE – MARCH TO MIAMI ASJE’s March to Miami was a series of 30 educational events, rallies and protest marches against the FTAA in 23 cities and 15 states covering 5500 miles from September to November, 2003. Aristotle: ( REMEMBER?) - . tragedy depicts the downfall of a noble hero or heroine, usually through some combination of

HOW TO REMEMBER - . why improve your learning and memory techniques?. sketch the back of a $1 bill. why don’t we

Philosophical Underpinnings (Reprise) - . march 5, 2010. remember. all assignments must be in by march 8 th , to receive