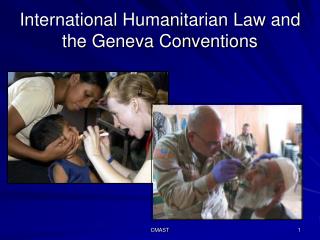 International Humanitarian Law and the Geneva Conventions. IHL. Treaties regulate the conduct of hostilities. DoD policy to adhere to these treaties. IHL. Protects people who are not or are no longer participating in hostilities. Purpose- limit and prevent human suffering. The Geneva Conventions - . what is it?. i nternational law that regulates the conduct of armed conflict and seeks to

SESSION 5: INTERNATIONAL HUMANITARIAN LAW - . at the end of session 5, you will be able to:. state the purpose of

Survey on International Humanitarian Law QUESTIONNAIRE - . there is a body of law about how wars should be conducted,