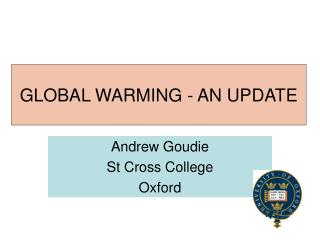 GLOBAL WARMING. GLOBAL WARMING - AN UPDATE . Andrew Goudie St Cross College Oxford. OBJECTIONS. If warming is taking place, it is due to solar activity Satellite observations do not show warming trend Only urban centres are warming Past changes have been large and rapid, yet we survived Global Warming and CO 2 - Greenhouse effect how does it

Global Warming and Science - . so far the balanced story of basic science is not getting through to the public there is

Global Warming - . so what? . april 2014 . pay ranchers and farmers to move. carbon neutral is no longer enough. carbon

Global Warming - . so what? . january 2014 . pay ranchers and farmers. in brief,. credit. changing. to move carbon from