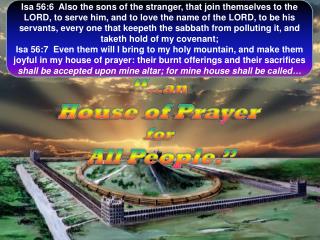 Isa 56:6 Also the sons of the stranger, that join themselves to the LORD, to serve him, and to love the name of the LORD, to be his servants, every one that keepeth the sabbath from polluting it, and taketh hold of my covenant; Healing in this house words and music by David Lisa Binion. Used by permission. CCLI402487 - There is healing in this

Opening Prayer - . lesson 4. god created and cares for his world. creed. a statement telling what we believe or trust in.

Seven times a day I praise You, Because of Your righteous judgments - Psalm 119:164 - . evening prayer compline

What is prayer? - . prayer is the language we speak with god. what is prayer?. intercession – latin: intercedo = come

PRAYER &amp; FASTING - . lost concept. not commonly practiced in the church not even talked about much christians

Guardian Angel Prayer - Angel of god, my guardian dear, to whom god's love commits me here; watch over me throughout the