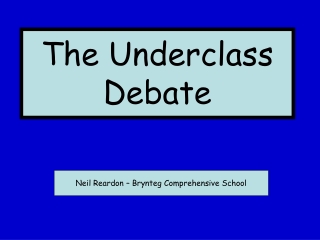 The Underclass Debate. Neil Reardon – Brynteg Comprehensive School. Who are the underclass?. Historically, the underclass are people who were seen as below the working class, people with low morals and no skills. THE UNDERCLASS - . by dr. frank elwell. the underclass. america has developed a unique and seemingly permanent underclass

The Underclass: Culture and Race - . why are some people persistently poor?. possible answers examined (debunked) in

THE GREAT DEBATE - . the giver edition. so hyped for these debates!!!!!. with a partner, discuss:. do you agree with the

THE CONSCRIPTION DEBATE - . australia’s involvement in world war i. conscription in australia. as the news came from

The debate process - . proposition . the proposition is simply what we are arguing about. it is a strict statement that

The Standards Debate - . (. brief overview of the standards. value: “good stuff” that is derived from the resolution.