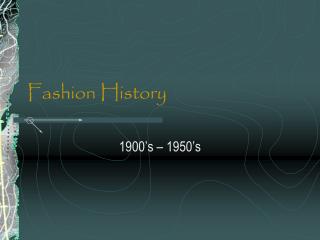 Fashion History - . b.c. to present times. b.c. fashions of this period come from several groups in existence at this

Fashion History - . fashions of the twentieth century open word to write the answers for these questions. gibson girls.

Fashion History - . fashion history glossary can you match the picture to the definition in the glossary?. beatnik.

Fashion throughout history - . the nineties. by lorenzo garcia, roxanne nocos , and jonathon conlon. popular sayings and

History of Fashion - . - costume through the decades. why fashion?. fashions move ever forward at a dramatic pace due to

FASHION HISTORY 101 - . choose one of the 3 assignments. illustrated notes. instructions. illustrate the details