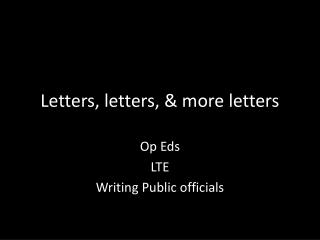 veCollect - . a tool for managing letters of evaluation / recommendation. through vecollect you will:. list your

You Can Know Your Letters Too! - . start here. by meredith bauer. this button means…. go to the next slide. go to the

Silent Letters - . here is a list of common letter combinations with silent letters. this list contains most of the

Cover Letters - . cover letters. to potential employers when you send your resume for consideration. letters to network

Civil War Letters - . ideas for lesson plans. list of letters for today:. from various sources. letter from b. musser,

Routine Letters - . have you ever written a letter to a company? did you expect a response? if you receive a fan letter

Read and listen to these words. Which letters are silent letters in these words? - . 3. trois. chat. salut. souris.