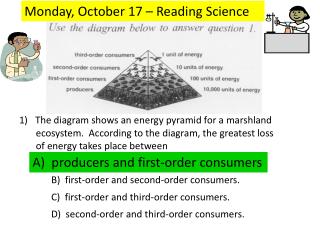 Monday, October 17 – Reading Science . Reading Science Questions. The diagram shows an energy pyramid for a marshland ecosystem. According to the diagram, the greatest loss of energy takes place between A) producers and first-order consumers. Reading Questions - . from which nation is ho chi minh declaring independence? why? who are they asking for recognition?

Science Reading - . different kinds of reading. there is a significant difference between a science class and a

Questions from reading? - . population and resources – the work of malthus, the club of rome and boserup /simon.

Reading Comprehension Questions: - . the three basic types…what are they and how can good readers tell the difference?

Homework: Reading questions - . tonight while reading chapters 5-7, write down answers to the following questions in your

PRE-READING QUESTIONS - . 1. do you know the names of these three tall buildings?. what are their names?. what cities and

Punk Reading Questions - . what is amiga (193)? what role did it play in the public-ation or making public of music in

Pre-Reading Questions - . respond to the following statements with yes or no and give reasons for your answer. all people

Science questions - . how will source-receptor relations change due to expected changes in emissions? how should future

Science Questions - . by: emma l. 2a defining what is a convection current?. the movement of a fluid, caused by

Study/ Guided Reading Questions - . prologue 1. where does this story take place? 2. how does shakespeare describe romeo

Reading Skills : Inference Questions - . outcomes: to know and practice the skills needed for the exams. these questions