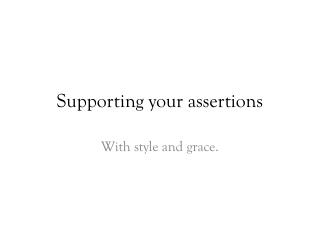 Supporting your assertions. With style and grace. When you make an assertion, you must support it with evidence. Assertions are pronouncements, not facts. You don’t want your audience to have to take your word for them. Your credibility rises when you can prove what you say is true. Supporting Children Who Take Us to the End of Your Rope - . daniel hodgins dkj5075@aol.com www.danieljhodgins.com.

Supporting Evidence Policy Making and its monitoring - . overview of issues and approaches. what is a policy?. many

AUDITING SECTION 1 - . introduction. definition of auditing. auditing is a form of attestation attestation refers to a