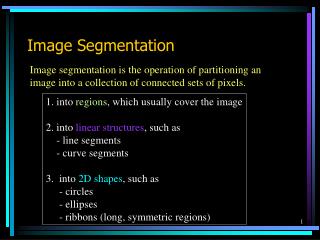 Image Segmentation. Image segmentation is the operation of partitioning an image into a collection of connected sets of pixels. 1. into regions , which usually cover the image 2. into linear structures , such as - line segments - curve segments 3. into 2D shapes , such as PDE methods for Image Segmentation and Shape Analysis: - From the brain to the prostate and back presented by john