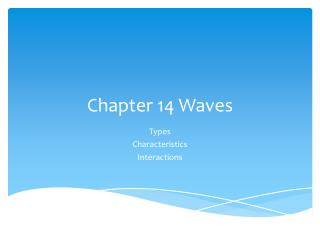 Chapter 14 Waves. Types Characteristics Interactions. Types of Waves . Dr. B-Z . 1. Define Wave. A wave is a disturbance that carries energy though matter or space. . 2. The matter through which a wave travels is called a _. Medium Examples Pond Air Earth. Chapter 14 PowerPoint - . by: curtis rich and will warner. objective #1. q: why is water so important, how much