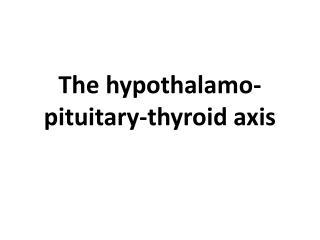 The hypothalamo-pituitary-thyroid axis. Thyrotropin releasing hormone (TRH):-. TRH is manufactured in the hypothalamus and transported via the portal circulation to the pituitary where it ultimately leads to exocytosis of TSH. Hypothalamo-pituitary Axis - The endocrine hypothalamus. the hypothalamus is a small area of the brain lying between

Pituitary and Thyroid - . assistant professor dr. hayder b sahib. the neuroendocrine system, which is controlled by

INTRODUCTION TO THE ENDOCRINE SYSTEM AND THE PITUITARY-HYPOTHALAMIC AXIS - . d. c. mikulecky professor of physiology.

Reproductive Physiology Lecture 1 Hypothalamic-Pituitary-Gonadal axis - . objectives. by the end of this lecture, you

Reproductive Physiology Lecture 1 Hypothalamic-Pituitary-Gonadal axis - . objectives. by the end of this lecture,

Microscopic structure of: Pituitary, Thyroid ,Parathyroid and Suprarenals - . dr rania gabr. objectives:. by the end of

Pathogenesis of diseases of the Pituitary, Pineal,Thyroid and Parathyroid glands - . trinity medical school dublin dr. b.