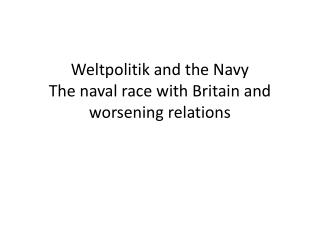 Weltpolitik and the Navy The naval race with Britain and worsening relations. Connector. Outcomes. All to know what the arms race was and it position in Germany foreign policy Most to research what happened Some to see how this will effect the causes of the First World War. Why a navy?. The Naval Race - . what you will learn today:. explain why britain wanted to have a large navy. explain why germany

NAVAL OFFICERS and NAVY CHIEFS - . 3 real life stories. the first …. eleven people were dangling below a helicopter on

Race, Racism , Race Relations and Sport - . the end of racism. racism is not the main problem facing blacks! destructive

What was the impact of Weltpolitik on international relations? - . recap quiz. what was weltpolitik ? whose idea was it?

Britain and the EU - . a brief history of the founding britain’s joining and development within the eu the present

BRITAIN AND THE BRITISH - . quiz. 1. the capital of northern ireland is. dublin cardiff belfast. 2. the british flag is

Britain and the EU - . the background. pm david cameron’s in/out referendum pledge (23 january 2013) the growth of

BRITAIN AND THE BRITISH - . 1) the british flag is called … the union jack the stars and stripes the maple leaf 1) a.

Britain and the EU - . 20 january 2014 by sigrid brevik wangsness. introduction. current british attitudes to the eu as

The United Colours of Britain: Race and Ethnicity in the UK Today - . estra tõnisson estra@kivilinn.tartu.ee