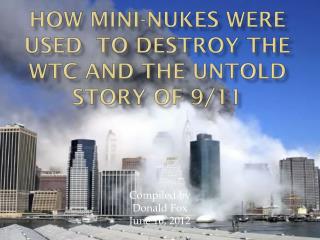 How Mini-nukes were used to Destroy the WTC and the untold story of 9/11. Compiled by Donald Fox June 16, 2012 . Bio. I’m not a nuclear physicist IT Professional from Minneapolis, MN Bachelor of Science in Information Technology I study Black Ops and “Deep Politics.” Who has nukes? - The countries in the world's nuclear

Who has nukes? - The countries in the world's nuclear

Selling Smart: A story of two sales experts - A story about the traditional seller and the social seller. at the end of

How Does Love Overcome Bitterness? - . how does satan work to destroy us?. as a young christian i did not understand the

Act 3 Mini Quiz - . 1.) read the following lines. what conclusion can you draw about danforth from his response to

The History Of Programming Languages - . spring 2012. prehistory of programming languages the story of the programmers of

How Does Satan Destroy Love Among Brethren - . the key to understanding god’s will is the cross of christ. we should