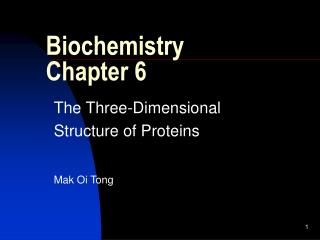 Biochemistry Chapter 6. The Three-Dimensional Structure of Proteins Mak Oi Tong. Introduction . This chapter is devoted to an examination of: the several levels of protein structure – their geometry how they are stabilized and their importance in protein function. Structure of proteins.

Unit 3: Chapter 6 - Biochemistry - . the chemicals of life. a. atoms. atoms are the smallest unit of matter. 1. made

CHAPTER 3 BIOCHEMISTRY - . carbon compounds. although water is the primary medium for life on earth, most of the

Chapter 3: Biochemistry - . biochemistry. water. water has many unique properties that allow for many of its unique

Chapter 20 Liver Biochemistry - . the function of liver. liver is the largest and metabolically the most complex

Chapter 16 Biochemistry and Biotechnology - . brown hair, blue eyes, and big mice. the study of genes has increased our